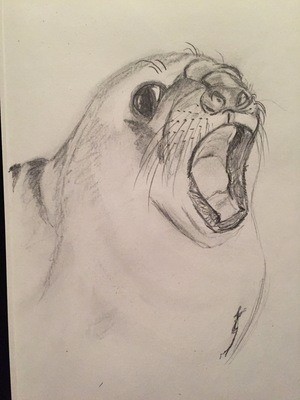 A lifetime ago I was a young and energetic (ish) uni student. I studied Surface Pattern Design and had a summer internship set up with Emma Bridgewater. I was going places. I knew my path. It involved graduating from my course and speeding off on my exciting roller coaster of a career. I’d continue to study. I’d travel. I’d make good money and fulfil my dreams.
But life had other plans. My health problems were already there. Though undiagnosed and less severe than today they were already dragging me down. Like lead weights tied to my heels they slowed my progress. Put me forever behind the pack in the race to qualify. But I was determined. I could do this! I would work extra through the summer and take my third year part time. Unfortunately my tutor did not agree. My tutor who also happened to be head of the faculty.
Because I only had a crohns diagnosis she didn’t see how all my other complaints fitted with that. Though I had mountains of doctors notes she felt I had just fobbed off uni. Though, with my allowed extra time, I was on track to pass the year she felt I hadn’t had enough taught time. Her recommendation was repeating the second year and doing the third year part time. I didn’t have enough funding for that. I told her so. I told her I’d have to leave. She stood by her recommendation.
It was then that my life altered. It was the that everything I’d hoped and dreamed of since being tiny crumbled to dust. This was the first major blow dealt to me by my health. The first of many. But this was possibly the one that broke me the most. Not only because it crushed my dreams. Also because my self esteem was shattered. Surely if I had any talent at all my tutor would have fought to keep me on the course? Supported me, as I’d seen her do other students. Not cast me out like last weeks rubbish.
That was almost ten years ago. At the time I believed I picked myself up and carried on, unfazed. But that’s not true. My self belief had taken a huge knock. From that day forward I stopped drawing. I didn’t paint. My sewing machine lay idle and was eventually gotten rid of. Looking back through my social media accounts there’s been many times I’ve sworn I’ll get back into my drawing. My art. But I never did. I remained broken.
Then I started this blog. The first creative thing I’d done in such a long time. Even though I wasn’t writing for anyone in particular it still terrified me. But I ploughed on. A few people seemed to enjoy it, and a friend asked me to share it on her site. (https://www.consciouscrafties.com/) Conscious Crafties is a selling platform for disabled people and their carers. It gives them an outlet for their creativity and helps them to build up their confidence and self worth. Not only did I join the site. I also joined the private group for the Crafties. Being a blogger for the site meant they kindly let me in.
I have to say that being around such a creative group of people has been incredibly therapeutic for me. Their makes are beautiful and inspiring. So inspiring that a few weeks ago I picked up a sketchbook that I’d been given two years before. For the first time in such a long time I sat and I drew. And I enjoyed it! I felt relaxed and at peace. Since then I’ve been to an art master class and enrolled in a life drawing class. Only once a month. But it’s something to look forward to. I’ve drawn more and more and even took some tentative steps into crafting.
I will never be the high flying designer is hoped to be. But thanks to the creative environment I happened upon in Conscious Crafties I’m now starting to enjoy art again. I’m starting to heal.
Here’s a few of my pieces I’ve done and a beautiful key ring which is one of the many items which can be found on Conscious Crafties.